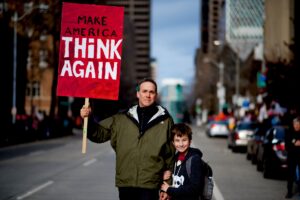 A mentally healthy person doesn’t stage a pointless joyride around the hospital at which he is a patient with a virulent infectious disease. He doesn’t disregard safety protocols and callously expose others to the virus. He wouldn’t double-down on this reckless behavior the next day with another photo app at the White House after insisting upon a premature discharge from the hospital.

He is so narcissistic and deluded as to believe that he’s the only individual who can vanquish COVID-19 from one’s person and come away unharmed…and then has the temerity to use vapid spectacles as a metaphor for an exhibition of the strength required of a president (an insane ploy that could actually cause his physical demise). Do we really need any more proof that this president is unwell and only cares about himself?

This is blatant self-dealing malevolence. We all respect the office of the presidency and wish we had a president who felt the same. It gives us no pleasure to emphasize that Trump is a sociopath who doesn’t care that 210,000 (and counting) Americans have died as the result of his willful ignorance. A president in control of his faculties does not deceive the public and compare Covid-19 as equivalent to the seasonal flu. It’s not possible to be sympathetic to someone who has no empathy.

As if there hasn’t been enough death amongst us exacerbated by mistruths, incitement and fomenting of hate, Trump persists. It’s no wonder that a group of despicable miscreants planned to abduct and likely kill the governor of Michigan, Gretchen Whitmer. It’s inarguable that these domestic terrorists heard  Trump’s “Free Michigan” call-to-action.

Trump is a Paper Tiger. An abject fool. Republican senators and congresspersons are empowering this empty vessel for their own reactionary, ultra-conservative agenda. The problem for them in following this foolish Mitch McConnell playbook is that they will be ousted along with Trump. The schism in America that this “Follow The Leader” mindless polemic created is ironically responsible for inflating a blowhard president into believing his influenced rhetoric which then circuitously feeds this echo chamber.

Trump’s 2016 election was an unfortunate aberration. He will go down as the worst president in American history and his obsequious Republican enablers will be dismissed as weak-minded pariahs. Trump will be defeated in 2020. It is vital that political participants in this undermining of American decency and values also be voted out.

This election must deliver a resounding referendum against Trump’s divisiveness so that he and his sycophant allies in Congress (and “Fox Disinformation News”) have no choice but to accept their defeat without more propaganda, lately designed to incite civil unrest. Voters who subscribe to traditional Republican ideology (vs. white supremacy, etc) would be best advised to regroup and focus on the elections of 2022 and 2024. Find candidates who are patriotic and actually care about you and us all.

Socially Driven Music is focused on rallying music artists to the anti-Trump campaigns (we will undermine his lying antics aimed at voter suppression) and/or to participate as poll workers, where the virus allows, to incentivize voter turnout hyper-locally. Artists and songwriters who wish to support opposition campaigns against the most vulnerable GOP candidates can find information in the Socially Driven Landing Page and valuable essay (which also reminds us of many of the unhealthy actions of this very unwell president).